Your toddler needs to develop her hand eye coordination to increase her learning and understanding, although she is more active, more mobile and more curious than ever before.

What is Hand Eye Coordination?

This is the ability of the vision system to coordinate the information received through the eyes to control, guide, and direct the hands in the accomplishment of a given task, such as handwriting or catching a ball.

Hand eye coordination uses the eyes to direct attention and the hands to execute a task.

Between the ages of 15 months and 3 years, your child's hand control increases, enabling her to manipulate small objects, to gain better control over the use of cutlery and to fetch and carry items by herself.

The Importance of Hand Eye Coordination

Remember too, that eye hand coordination in children involves vision as well as finger movements.

Your growing toddler has matured to the point where her vision, hand and eye coordination combine effectively to enable her to focus keenly on a small toy that attracts her attention and then put her hand out to grab hold of it.

Hand eye coordination games that previously were too demanding for her, such as jigsaws, now hold great interest. The challenge of applying these hand to eye coordination exercises to solve even more difficult puzzles entices your determined toddler.

Your child's hand preference - that is, whether she prefers to be left handed versus right handed, was not noticeable at birth, but it will start to become apparent between the ages of 15 months and 3 years.

You'll notice that she generally uses the same hand for most tasks involving manipulation. Research indicates that approximately one boy in ten and one girl in 12 is left handed; over 90 % of children are obviously left handed or right handed by the time they reach school age.

Psychologists don't know for sure whether handedness is inborn or learned. There is a suggestion that a child who is right handed may have broader brain connections to the right side of her body, which give her greater control over that side as compared to the left.

However, there is also evidence that parents who are concerned about their infant's possible left handedness and who gently encourage her to use her right hand, may succeed in creating a preference for the right. But this strategy only works with some children and is ineffective if started after the first year.

Being left handed surely makes life more difficult as we live in a right handed world. The majority of children use their right hand for opening doors, for cutting with scissors, for drawing, for handling small objects, and so on.

Life is more difficult for left handed people - for example, left handed writing is more challenging because left handed children tends to drag their hand over their writing or drawing, often smudging it.

Don't be tempted to force your toddler to use her right hand if her natural preference seems to be to use the left hand. This could cause difficulties in other areas of development.

A fact about left handed people - forcing a left handed toddler to use her right hand could create language difficulties. Reason - there is some evidence that since hand preference is controlled by the part of the brain that also controls speech.

Some more left handed facts - pressuring your toddler to go against her natural preference will result in confrontation and frustration and could create a problem where none existed before.

It doesn't matter if all she manages is to make a mark on the paper. Drawing adds an extra dimension to her life and is something you should encourage whenever your child shows an interest.

Aside from helping increase her hand eye coordination skills even further - and giving her lots of fun - drawing brings your toddler plenty of other benefits.

For instance, by enabling her to practice making different shapes and patterns, it increases her pattern-recognition skills, which are extremely important later on when it comes to learning to read. It can also have a very positive effect on her self-esteem. When she sees her drawings pinned up on the wall of your home, she is full of pride at her own achievements.

Drawing is also a good way for your growing toddler to express her feelings. You only need to watch her scribbling furiously at a piece of paper to know that she is totally involved in this activity.

She can draw what she wants, use the crayon in any way that she wants, and can become as excited during this activity as she wants. It's a great form of emotional release.

You'll know from your own experience of, say, trying to thread a needle or attempting to sew on a button, that activities involving eye and hand coordination can be very frustrating when they don't go according to plan.

Your toddler feels the same way when that annoying last piece of the jigsaw won't fit or when the lid infuriatingly holds firmly on to the box despite all her efforts to dislodge it. Calm your frustrated toddler, and then show her how to complete the activity in a methodical, relaxed manner.

Looking for more questions and answers about hand eye coordination in children?

Also be sure to visit all the hand eye coordination pages for different ages.


BACK to Hand Eye Coordination 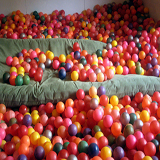 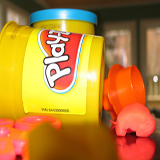