Walking for exercise is one of the easiest, most enjoyable, and most adventurous forms of exercise.

Remember your first step? What a fuss everyone made! And then you continued to exercise walking right on through childhood, adolescence, and into adulthood.

But somewhere along the way, like most adults, you probably stopped walking, due to different reasons.

Walking as Exercise - A Kid's View

Some benefits that walking can have on your child includes:

What are Fundamental Movement Skills?

Having these skills is an essential part of enjoyable participation and a lifelong interest in an active lifestyle.

Changes in walking for exercise style

One of the things youll notice is that your toddlers walking exercise style changes.

And its not just that he grows steadier on his feet as he approaches the 18 month old mark.

When he is walking for exercise, his toes tend to point towards the front rather than inwards (which enables him to move at a quicker rate). He also keeps his feet closer to the ground instead of lifting them as high as he did when he took his baby first steps (which helps him maintain balance) and he takes shorter steps.

The combination of all these small changes results in improved stability and control while walking for exercise. 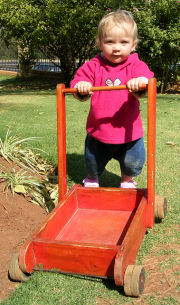 Dont be surprised to find your child going over the same movement experience again and again  this is her instinctive way of mastering a new skill.

Examples of repetition might include your 21 month old baby climbing up on to a chair so that she can sit at the table, then immediately climbing down again, followed by a further attempt to climb up again.

Its not that she cant think of anything else to do. She instinctively knows that repetition is the best way to improve her fundamental movement skills, balance and hand eye coordination.

This also learns her determination as she keeps going until she feels that she has got it right.

There is wide variation in athletic ability among 2 year olds. This is largely due to the different rates of physical and neurological maturation.

For your toddler to achieve complex fundamental movement skills, he must have developed the important underlying muscular and neurological structures.

If your child development milestones isn't up to standard for his age group, the development of motor skills like running, throwing, climbing and walking for exercise will also need attention, no matter how much he practices these actions.

So be careful not to push your child too hard if he struggles physically  its probably that his body just isnt ready for all these fundamental movement skills. Try again in a few weeks.

Your childs increased social and emotional development awareness can have a negative effect on her self concept. Building self confidence may drop when she realizes some other children are more agile than she is.

If she comes to you in tears claiming I cant run like my friend take her feelings seriously. It may be a small matter to you but its extremely important to your sensitive toddler being 2.5 years of age.

Give her a reassuring cuddle, comfort her until she calms down, tell her that she will improve as long as she continues to try hard and remind her of all the other fundamental movement skills that she has already acquired.

Your child is very determined. He dreams about scaling barriers, throwing the ball high in the air and running very fast, all because of his ability to improve imagination that knows no limits.

When he discovers his physical limitations, your 3 year old may explode with rage and frustration.

Now is the time to start walking for exercise with your kids. They can only benefit from it.


TOP of Walking for Exercise

BACK to Fundamental Movement Skills